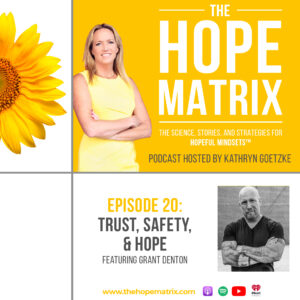 Given his history, he should be dead. Or incarcerated. He grew up in Las Vegas in a broken family of eight. In a true story of Hopelessness to Hope, Grant Denton is this week’s guest on The Hope Matrix.

Grant Denton burned through jobs. He became addicted to heroin and crystal meth. He married and divorced twice, having two sons. Because of his addiction, he lost his job and his family, intermittently living on the street from 2007 to 2013.

In 2013, Grant was arrested on burglary charges that could have sent him to prison for five to seven years. The judge gave him a choice: enter drug court and rehab or go to prison. On Dec. 28, 2014, Grant used illegal drugs for the last time. He moved to Reno for a sober living fresh start, working in a homeless shelter, for the Downtown Reno Business Improvement District, and in an addiction treatment center, where he formed a crew of community volunteers that lead to the Karma Box Project.

Today, Karma Box has grown from its namesake mission to become an umbrella organization that “partners with homeless people, meeting them where they are,” Grant says.

This partnership ranges from safe restrooms to counselors in emergency rooms, from secure and sanitary tent communities to helping people obtain identification documents so they can access social services on their journey from homelessness.

In this episode of The Hope Matrix, Grant speaks about his unique experience dealing with Hope and Hopelessness. Kathryn and Grant discuss the stress response, skills, and weaknesses when coming out of the stress response, and how one cannot possibly access their higher-order thinking when in a stressful situation. Coming from a place of such extreme Hopelessness, Grant came into a new place where he activates Hope in those same communities from which he came. His work with the Karma Box Project helps to make Reno the first-ever Hopeful City as part of the Hopeful Cities Project.

You can learn more about Hopeful Cities at https://hopefulcities.org/